Previously we discussed some considerations for putting together a good army list, but in truth you can't fully know an army's quality until you take it to the tabletop and get some games in with it. Testing your list in a variety of settings is especially important in Legion, as there are many different combinations of Battle Cards that create numerous scenarios for play. Depending on the circumstances, selecting different Battle Cards could lead to a significant advantage for one player over the other, so let's talk about ways to tilt the scenario to our favor. 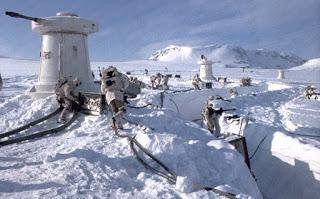 You should already have a sense of your army's strengths and weaknesses just from going through the army building process, so now is the time to quickly size up your opponents forces. Since the first step of setup has you and your opponent placing your units and cards next to the play area, you should be able to take a brief glance at their units and upgrades can give you a sense of how their army stacks up against yours. Do they have units that are slower or faster than yours? Do they have a lot of long range firepower (range 4 and beyond), or are they more dangerous up close (melee and/or range 1-2)? Do their units outnumber yours, giving them more activations? And specifically, how does their number of trooper units compare to yours?

With the answers to questions such as these in mind, you can then look at the Battle Cards you've dealt for this game and identify which ones you want to discard and which ones you are inclined to keep. In the tables below I have listed the Battle Cards from the Core Set and summarized the elements and characteristics of an army that I have found to be rewarded and punished by these cards. Notice that while most cards can be helpful for certain units, several cards are not particularly punishing.

As you play more games and gain more experience with different Battle Cards, you will probably come to have favorites with which you are most comfortable and that you can readily exploit. You will also notice certain combinations can be especially bad for some army compositions, others will be particularly beneficial, and some combinations will create unexpected and even baffling situations.

Once you have an idea of your strengths and weaknesses relative to your opponent and identified which Battle Cards you want to get rid of and which ones you'd like to keep, you're ready to make your eliminations.

Here are just a few things to keep in mind during this process:

Look Out for "Game Changers"

Sometimes eliminating one Battle Card in favor of another can quickly turn things on their head, so keep an eye out for these situations. For instance, Battle Lines tends to leave lots of room for flankers to maneuver; discarding it in favor of Long March results in a narrow field with much less room for flankers to work. Should one player has a solid flanker in their army, then swapping one of these cards for the other will significantly change our expectations for how that unit will perform.

One of the most drastic examples of a "Game Changer" is the Disarray card. As you might expext, eliminating virtually any other deployment in favor of Disarray can totally redefine the battlefield. Some other cards that can do this are Breakthrough (maneuver becomes king), Key Positions (significant blue player bias), and Rapid Reinforcements (deploy reserves in unexpected places). 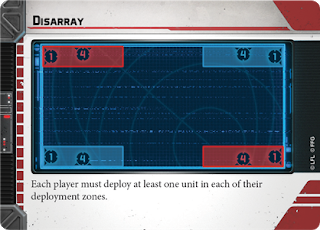 As a final example, consider an Imperial army that includes two units of Snowtroopers, both upgraded with a Flametrooper. While deadly at range 1, these Snowtroopers are quite slow. With Snowtroopers on your side, the combination of Breakthrough and Long March would seem like a nightmare scenario, as these units in particular will struggle to reach the enemy deployment zone to score points. However, if the Rapid Reinforcements condition is added to the mix, the Snowtroopers' mobility is suddenly much less of a concern since you can set the pair of them aside as reinforcements and deploy them anywhere outside of range 2 of enemy units-- perhaps even in the enemy deployment zone! 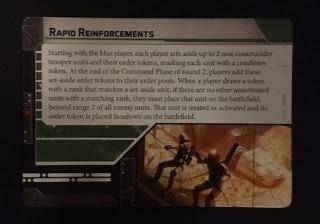 At times, you may feel that you have a bad match up and the odds are against you, but some shrewd choices during Battle Card selection can improve your chances and help create opportunities for victory.

And yet, given the limited control either player has while defining the battlefield, it's unlikely for you or your opponent to get a perfect combination of Battle Cards. Regardless of how things pan out in the setup phase, the battle still needs to be fought before a winner can be declared. Thanks for reading, and join me again next time as we look at testing your army in the heat of battle and effectively managing the chaos of combat!

John Smith is a lifelong gamer and Star Wars fan. You can read more of his thoughts about Star Wars: Legion on his blog,  Prepare for Ground Assault.